One of the important parts of V-ROX is creative labs, panel discussions and workshops. They will be held on “Barzha” (Sports Quay / Sportivnaya Naberezhnaya) on 29-31 of August. Speakers of V-ROX will be promoters and managers of festivals around the world, writers and enterpeters, representatives of companies connected to music industry.

V-ROX will run a presentation of “ACT”, a book of a famous writer and journalist, Michail Idov; “Yandex.Music” team will talk about new possibilities for artists; Gibson will run a workshop, and Alexander Galushka, a minister of the development of Far East will come to talk about Pacific Russia.

If you’d like to take part in educational activities of the festival, please, sign up for them here. More info about speakers is here. All lectures and workshops are free of charge.

Words about music: from “Pitchfork” to “Act”. How the Internet has changed independent musician’s routine and music critic’s work. Presentation of the book “Act”

Music and business: how to link incompatible, not to lose creativity and earn money

V-ROX starts out on the international scene

Third Korean festival Zandari Festa will take place in October from 10 to 12 in Hongdae Area, Seoul. Artists can still apply!!! Vladivostok band So What? performed on Zandari Festa last year, after their successful debut on V-ROX. This year Mumiy Troll will represent Russia in Seoul. The best representatives of Korean rock music will perform at V-ROX this year: Galaxy Express, Idiotape, Dead Buttons, Hellivision.

Liverpool Sound City is a show case festival in Liverpool, hometown of the Beatles. It hosts over 3000 participants every year. LSC’s director, David Pichilingi will be one of the speakers of V-ROX 2014.

PLAYTIME festival (Anima Mundi Entertainment) has been running since 2002, every summer, 20 km eastward from Ulan-Bator, the capital of Mongolia. The name of the village is Gachuurt. There are more than 30 local and international bands that represent all the best there can be in modern music. The stage works for 10 thousand people of different age. PLAYTIME festival (Anima Mundi Entertainment) is committed to develop national Mongolian culture, economics and business. Russian artists don’t go there too often. A Mongolian band Mohanik will perform at V-ROX 2014.

New music video “Pirated copies” was first released for the members of the project “Mumiy Troll 2.0 with Google.”

It was filmed in Los Angeles by Singapore project. A young couple throwing pirated copies away is in the center of the video, which is really atmospheric with its picturesque American views.

Ilya Lagutenko: “Considering current conjuncture of music market I decided to work on the album “Pirated Copies” in a different way, from the process of creating to promotion. It will be something more than just a list of songs, a musical voyage to the world of visual reality, world of bands interests paralleled with music, world of creation and technology in harmony.

Every song in the album will be not just a song but a mini-project, created in cooperation with somebody. We are in our permanent search of new ways to perform our music in public. Because now musicians are trying to find out how to get public acquainted with their music and get a fruitful contact but not how to earn by performance.”

Julien-K from the USA released a new single

One of the main participants of V-ROX 2013 – American band Julien-K released a new single. The song “No You Can’t” was first presented to public in Vladivostok at V-ROX festival 2013. Vladivostok was the first in the world to listen to the song.

Listen and buy the single

Amir Derakh and Ryan Shuck have been musical partners for 13+ years. During their time together they have weaved in and out of mainstream music like a constantly evolving musical fashion house. In the late 90’s they were responsible for massive radio and sales hits such as “Blind” (Korn), “Blue Monday”,” Stitches”, and “Fiction” (Orgy), and recently “Crawl Back In” and “Let Down” (Dead By Sunrise with their pal Chester Bennington). After enjoying years of traditional music business success, the duo have spent the last 6 years methodically moving away from the mainstream success that put them on the map, instead opting to carefully steer their fans in a new direction, towards their new independent alternative electro rock project Julien-K – which sounds more at home with the likes of modern acts such as M83, The Kills, LCD Soundsystem, The Naked and Famous, Empire of the Sun, and even the Black Keys (see Derakh’s sleazy electro-blues guitar playing on the bands newest record “We’re Here With You”).

It is very difficult to put Julien-K in a specific category, and indeed it appears they may be creating a new movement of their own.

Honest music and honest hard work. Touring for years with no label support, slowly building the band up from nothing, to being able to debut at #2 on the US iTunes electronic charts, and top 10 on corresponding international charts.

“National Voting” V-RОХ with S7 Airlines is now on. The results of the voting will be announced on 1st August. This is the day when it is known who is chosen among 50 candidates to perform at “Fly away” stage, and who was the most active among voters and will be in the festival team V-ROX-S7.

Now V-ROX participants to be are actively performing at media and concert stages of the country.

A band from St.Petersburg “Nas Net” is one of potential winners. Their new music video “Raznica” was released on MTV Russia and on ELLO YouTube channel one week ago, on 28 June the band played in “Sokolniki” park in Moscow at the concert devoted to the Youth day.

“IronicO” band is now among the first candidates in “National Voting”, in the nearest future musicians will have two important shows: common performance with “Claps for” at Kubana 2014 festival and a concert at “Motoyaroslavets 2014” motofestival.

“Krik Monro” band now is #6 in the voting, but they obviously have a chance to have better results. The most important event of the month for this team will be one of the biggest rock festivals of Novgorodsky region “Bereg Maugli” where they will perform.
The band was invited to play rock music at the festival by “Nochnye volki” motoclub.

Affect the festival voting for your favorite band!

The second international showcase festival V-ROX will be held in Vladivostok on August 29-31. It will be a great mix of open concerts, city festival, a musical business conference and workshops.

Several different musical stages, libraries, a cinema, an exhibition of independent artists and an art-fair will be open for three days in the festival area (Sports quay). Admission is free. 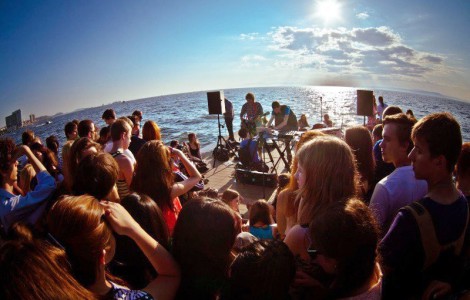 Ilya Lagutenko about participants V-ROX 2013: Vladivostok musicians suffer lack of experience in playing. On different scenes. For different public. To sharp their talant. One of my favorite bands – Crossparty, first time was even scared to enter the scene in V-ROX, because they only played on home paties befor. Starсardigan made good impression. Hardcore band “So What?” so relished asian promoters, that in few monthes thay were taking part in Seoul’s festival.

This year Vladivostok presents 16 teams for V-ROX , some of them are already lit up last year on the festival stage, for others this V-ROX will be the first.