Former closed city and military port on the shores of the Sea of Japan, it serves as the eastern terminus of the Trans-Siberian Railway and Russia’s largest port on the Pacific coast. Vladivostok was given a new life after APEC 2012 Summit and now has a status of a Free Port (or Porto Franco).

Everyone must see this amazing city because of its music scene, stunning bridges, beautiful islands, vast amount of delicious seafood, gorgeous weather and landscape and most certainly its incredible people. 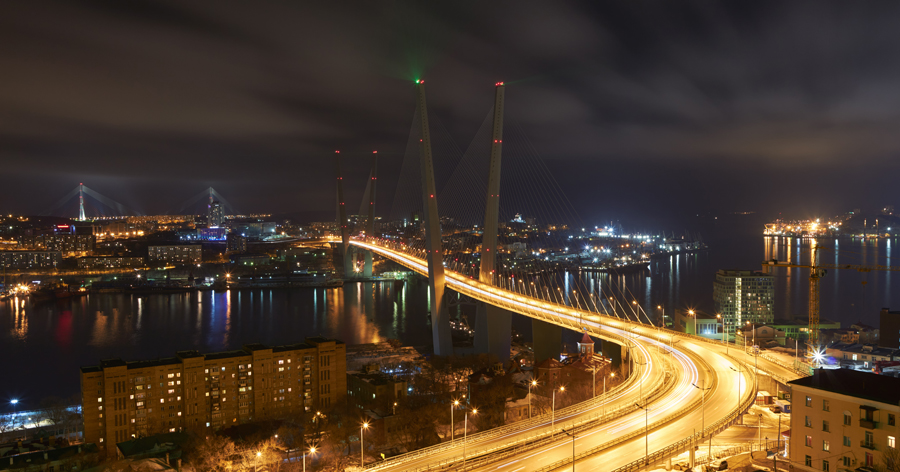 The city offers many hotels and apartments for an affordable price. There are several hotels which are located within walking distance from the embankment and city beach: A Hotel Amur Bay and AZIMUT Hotel Vladivostok 4*.

The most stunning panorama of the city and the bridges can be seen from the viewing platform near the monument of St Cyril and Methodius. Getting there is possible by taking the famous Funicular.

Key places to visit are as follows:

— The Monument to the Fighters for Soviet Power standing on the city’s central square is one of Vladivostok’s most recognizable symbols.

— Arseniev State Museum of Primorsky Region, 20 Svetlanskaya St. To understand and to fall in love with the city of Vladivostok, which had been changing during its entire history, paying a visit to the main museum in the city is a must.

— Museum Vladivostok Fortress, 4-a Batareynaya St. Open 10am-6pm daily. Overlooking the sea, these fortifications were built more than a century ago to guard against invasion from Japan. Today, the grounds are cluttered with defused bombs, chain guns, and small military vehicles.

— C-56 Submarine, Korabelnaya nab. You can’t board the Pacific Fleet, but this WWII submarine is parked on land, by the Naval Memorial, and welcomes visitors; the interior is pretty well-preserved.

— Triumphal Arc (Nikolai gate), (Deep into the eastern side of Korabelnaya nab). Chapel-like arc constructed in honour of the visiting tsar Nikolai II, destroyed after the revolution and restored in 2003.

— Vladivostok Railway Station. Even if your journey doesn’t involve trains, the beautiful old Vladivostok Station is worth a look. The last among the steam engines stands at the platform. Don’t miss the 9288km signpost nearby.

— Lighthouse at Egersheld cape. This white lighthouse on the edge of a spit was built in 1910 and could be seen to every one who gets back from sea travels.

Other places to also see is the statue to the Vladivostok native — actor and oscar-winner Yul Brynner, family museum of revolutionist Suhanov, Far Eastern Federal University campus and the biggest oceanarium The Primorsky Aquarium on Russkiy Island, Primorsky Opera and Ballet Theatre in Vladivostok aka Primorsky Stage of the Mariinsky Theatre.

August and September are the hottest months for beach vacations. Many surrounding islands such as: Elena, Popov or Reyneke can be reached by ferry, motorboat or yacht. Russkiy Island can be reached by taking a road through the new cable-stayed bridge.

Also an ideal place for spending time at the beach is Lazurnaya Bay (Shamora) located 15km (9.32 miles) from the city, famously known because of the Mumiy Troll bands songs.

Where to eat and have fun