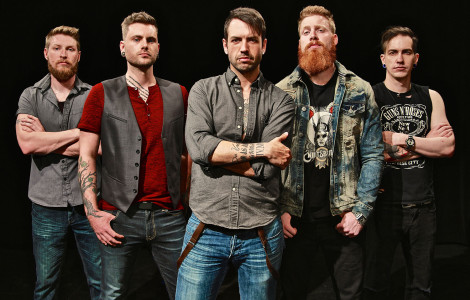 Burn the Ballroom is a rock project out of northern Virginia, USA, coming to V-ROX through the support of the U.S Consulate General, Vladivostok. Powerful instrumentation and majestic melodies and lyrics blur the lines between such music styles as anthem, rock, punk, alternative, and pop.

Lead singer of the band, Alan Gant, opted for rock music after studying piano and the violin. He spent his youth in Paris, where he started performing as a singer and guitarist in various bands and solo.

Drummer Jack Ivins not only pounds away on drums but also creates real theater at concerts, saying he performs “with the same commitment and intensity as when playing rugby and football for James Madison University.”

Guitarist Sterling Pearson – AKA “Sound Puncher” – “terrifies the masses was monstrous guitar leads,” at talent honed in LA clubs where he started his music career by experimenting in bands of many different music styles.

Tuomas Kasselgaard Easton plays keytar and brings the aesthetics of Scandinavian melodies and western classical music to the band’s sound. Tuomas also introduced bassist Josh Finks to the band, who has happily embodied Burn the Ballroom’s credo to “combine the modern and classical to achieve a rock sound spanning genres and eras.”