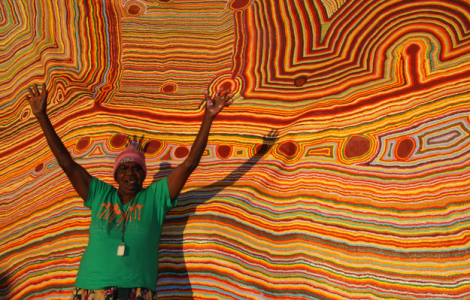 «The Canning Stock Route: the art of Aboriginal people of the Western Desert» exhibition will open in Arseniev museum (Svetlanskaya St. 20) on August 19 at 11:00. In cooperation between Australian Embassy in Russia and V-ROX festival, Vladivostok residents and guests will have a chance to get acquainted with different works of art, which reveal the world of creativity, culture and nature of Aboriginal people of the Australian Western Desert. The exhibition will be available not only during the festival days but also after.

Canning Stock Route is a cattle route established in the early 1900s in order to develop cattle breeding.
The route crossed the lands that had been occupied for centuries by Aboriginal people. Before contact with the Western world most of their art was ceremonial, such as paintings on bodies, sand sculptures, totems and rock painting.

In July and August 2007 nearly 70 artists travelled along the 1850-kilometre stock route during a six-week project on integration with the country’s history. More than 100 artworks were created on that expedition, and many new stories and artworks were added to the collection, which was given to the National Museum of Australia in 2009. These are vivid, exuberant, energetic works created by artists with different levels experience of mastery and drawing technique.

The original artworks in the collection of the National Museum of Australia include acrylics on canvas, watercolors on paper, woodcarvings and works of fibre. Artists work in both conventional techniques and new figurative styles to pass on their common knowledge of the world through art.