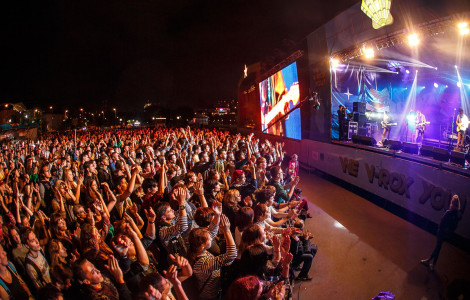 V-ROX — the main festival of the Free Port of Vladivostok and the biggest international music festival and creative conference, founded and curated by Ilya Lagutenko (Frontman of “Mumiy Troll” band) will be held for the fourth time 19-21st August at its usual home of Sports Harbor Embankment.

The festival slogan for this year is «People. Art. Cosmos». More than 150 musicians, DJs and representatives of the music industry collectively from 11 countries will be coming to V-ROX. The headliners for this year are TsuShiMaMiRe (Japan), Zodiac (Latvia), Joel Sarakula (Australia), Burn the Ballroom (USA) and Nisvanis (Mongolia).

All festival goers and guests have the chance to see artists perform over the course of three days on a specially built double stage «Sunny» and «Star» ‘decks’. Friday will become the Cosmos Day, Saturday – the international music Arts Day, and Sunday will be completely devoted to the People of the Far East.

Ilya Lagutenko, festival curator: «V-ROX festival started from a desire to make the city of Vladivostok the center of attraction of music tendencies in the Asia-Pacific region. We wanted to build a base for cultural exchange of ideas between Russian Far Eastern musicians and foreign neighbours and give them a chance to meet and communicate with each other. For the last four years the music program has proved its unique cool aspect, the festival is known and is well respected beyond Primorye region, but the most important point is that we have kept our audience and its growing even more, too. Considering past experience and wishes, this year we made a special day dedicated to the local performers, we are continuing to develop our cinema program, added master classes about healthy living and sporting invents. I understand that for any festival goer it is easy to get lost in the flow of numerous summer events, and we cannot capture «each and everybody» in one moment but building a new cultural platform is a long and diligent process but I still believe that every year more and more people who were «passing by» the festival venues have now become truly big fans of the event».

ROAD TO V-ROX
V-ROX is a unique opportunity for young Russian performers, international artists and producers to show their works and projects not only to new audience but also to leading international professionals. Artists were able to submit their applications via the festival website www.2016.vrox.org from January to May.

During April and May the best representatives of the Vladivostok’s music scene took part in «Battle for V-ROX» project in which young talented artists Pill Couple won the right to perform on the main stage of the festival. Other projects such as «Flying to the East» where held in partnership with Mumiy Troll Music Bar Moscow, winner was determined via public vote. Parks, Squares and Alleys won by a majority of votes and got the chance to fly out to Vladivostok. The band will be performing on the second day of the festival on the big stage and will also bring joy to the city residents during the club program.

For the first time ever most talented young musician aged 14-17 have the chance to perform on the big stage this summer, most promising and talented acts were selected via special festival project «Juniors V-ROX». Young groups Lightness and Dve Chetverti got the chance to prove them selves and show what they are capable of.

The festival night program will be located in the surrounding area of Pogranichnaya Street. All clubs are within walking distance of each other and musical genres will vary from heavy metal to experimental electronic music. There will be a chance to see the main stage artists and also other acts, who will be welcomed to Vladivostok. Some events will have entry fee exept for fesival delegates.

EDUCATIONAL PROGRAM
Festival Lectures and discussions, are an integral part of «Vladivostok Rock» and will be held at «Ocean IMAX» cinema. This year the program includes people connected not only with music but also with education, business, and world culture as a whole.

V-ROX will welcome many guests such director of Music from Okinawa project Ryuji Noda, film and TV producer Igor Mishin, professor of UCLA and the author of the music website Far from Moscow David MacFadyen, head of the international department at Midi Productions Yang Yu and many others.

There will also be an chance to take part in a healthy living course «Strength and Balance» from the leading yoga club «Aquarian Age» and its talented coach Feliks Pak. This special program will be held at in front of Aquarium Restaurant (Batareinaya St. 4) in the morning on 19th of August.

EXHIBITIONS
During the festival the residents and guests of Vladivostok will have the chance to see an exhibition of aboriginal art of Australia in Arseniev museum. There will be a chance for everyone to familiarize themselves with different art works shown in the National museum of Australia. The exhibition will be available to see until 15th of September 2016.

CINEMA
This year V-ROX Cinema will be located at the recently re-branded OCEAN IMAX cinema. Film screenings will include films from France and Australia. The festival will also welcome the premiere of the Mumiy Troll’s most anticipated ‘rockumentary’ film of the year – ‘Vladivostok Vacation’, which was presented at the Cannes Film Festival 2016.

FESTIVAL MARKET
During the festival days, across from the main stages a festival market will be put up in support from CreativeSpot. V-ROX Festival Market is a great opportunity for creative businesses. Here you can introduce your creativity to a wider audiences, test your business model “for strengths”, and, of course, show the potential of Vladivostok creativity to local Russians and foreign guests of the festival. Any project is welcome to take part, regardless of its form.

FOOD COURT
During the festival with the support of our long-term partner VVO Project – there will be a designated food court, where guests can enjoy far-eastern authentic delicacies and signature drinks.

HEALTHY LIVING
Besides morning yoga classes, this year festival goers will have the chance to participate in a city race together with RunDNSRun club, which will take place on the 19th of August, play rugby and beach volleyball throughout the festival days and see performances of professional cheerleaders.

Besides the local media, V-ROX 2016 has invited representatives of the leading mass media from Great Britain, China, Korea, USA, France and Australia.

SEE YOU AT THE FESTIVAL! WE V-ROX YOU!